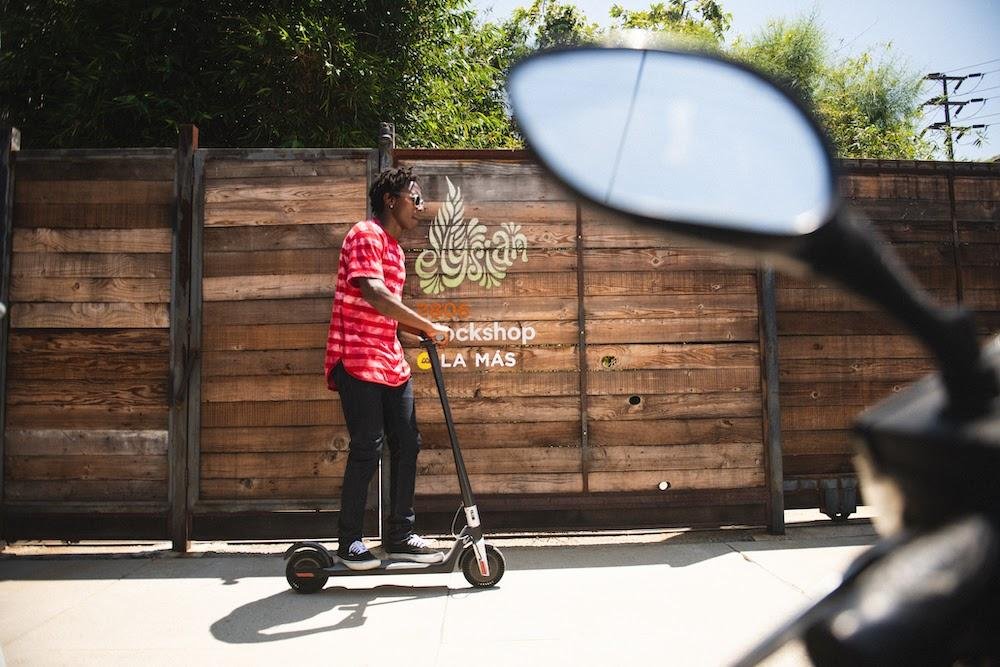 It’s a reasonable question to ask. After all, it seems like the safer option. Can you, and should you, ride an electric scooter on the sidewalk? In many cases, the answer is no: you cannot. Story after story in electric scooter news over the past few years has focused on the danger electric scooters pose to pedestrians when they’re left lying on busy city sidewalks as clunky obstacles. But even worse are some injuries sustained by pedestrians who have been hit by scooter riders. This is why most cities in the U.S. and many around the world have made sidewalks off-limits to electric scooters. 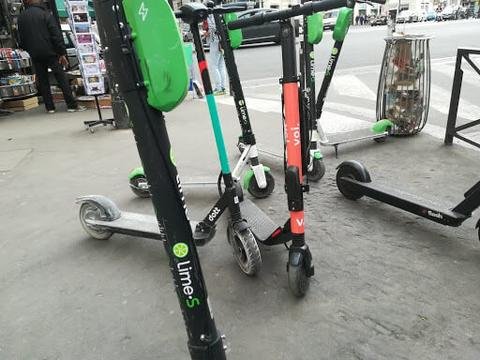 For Australia, it tends to vary by where you are. In Queensland, Victoria, ACT, Northern Territories, and Tasmania, you are allowed to ride on footpaths, but in New South Wales, South Australia, and Western Australia, you cannot. As is the case with most countries, e-scooter laws are handled by state or local government, not at the federal level. This can be confusing if you’re travelling to another country, so always make sure to check local laws before you ride. If the city you’re in has shared scooter companies operating, it’s a safe bet you’re good to go.

The overwhelming majority of stories about sidewalk injuries focus on scooter share companies like Bird and Lime since, in most cases, the story is about complicated liability questions. Who is responsible when a pedestrian is injured: the owner of an electric scooter or the rider? When it comes to privately owned electric scooters like Unagi, the answer is pretty clear since owner and operator are typically the same person. Riders of privately-owned scooters assume their own liability. But they are also far more likely to be familiar with their vehicle’s operation and less likely to leave it lying in the middle of the sidewalk.

“Two issues have stymied the larger positive public image” of electric scooters, notes Elektrek: “injuries and sidewalk riding. And the two are often linked.” Elderly and disabled pedestrians are particularly at risk from scooters on the sidewalk, and they account for a large number of e-scooter injuries. Lime, Spin, and other operators have worked on solutions for determining when scooters are either being parked or ridden on the sidewalk, seeking to alert riders and share the data with local governments. Such technology may dissuade and prevent sidewalk misuse, however current efforts are expensive and are only deployed at the scale of early tests.

At present, it’s largely up to individual riders to obey local restrictions, watch out for pedestrians, and ride safely and defensively. However, the situation is not as simple as having scooter riders stay off of the sidewalk. 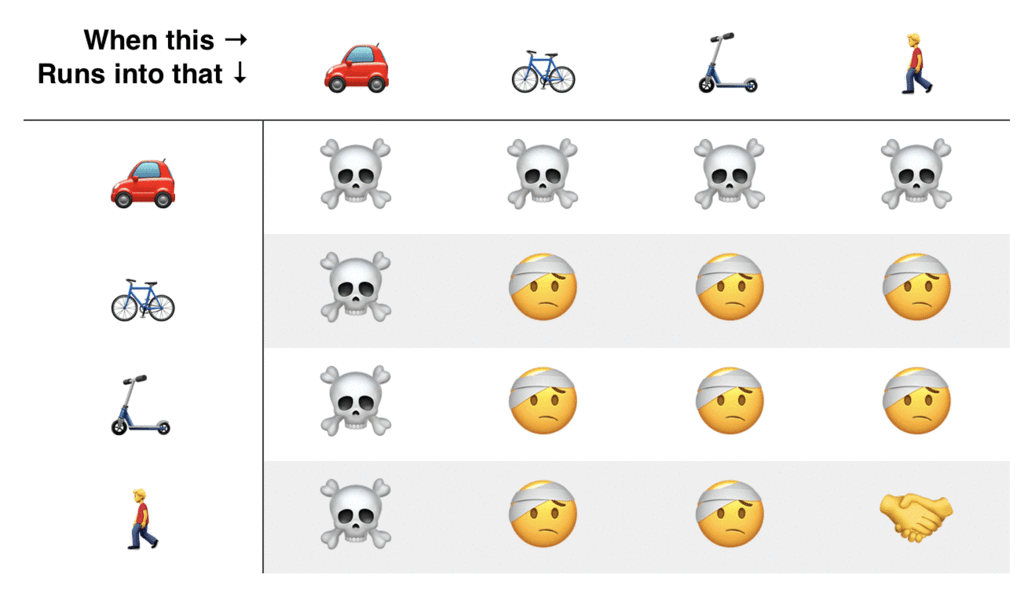 Many riders feel that it’s safer to ride on the sidewalk since they do not have to compete with cars. A person on a scooter may weigh an additional 20-40 pounds in case of collision, but a car will weigh 3,850 more pounds.

While there may be more opportunities for accidents on the sidewalk, injuries can be far more severe in road accidents, especially when roads are narrow, lack bike lanes, or have fast traffic. In fact, most scooter deaths that have occurred in the last three years during the rise of scooters, have been when a scooter rider has been struck by a car.

It’s also true that a large number of scooter accidents are due to lack of experience and failure to wear a helmet, two problems endemic to scooter sharing, which has a high number of first-time riders and makes helmet use impractical. Riders who personally own electric scooters instead of renting them have far more opportunity to practice riding safely and be sure to bring a helmet along. 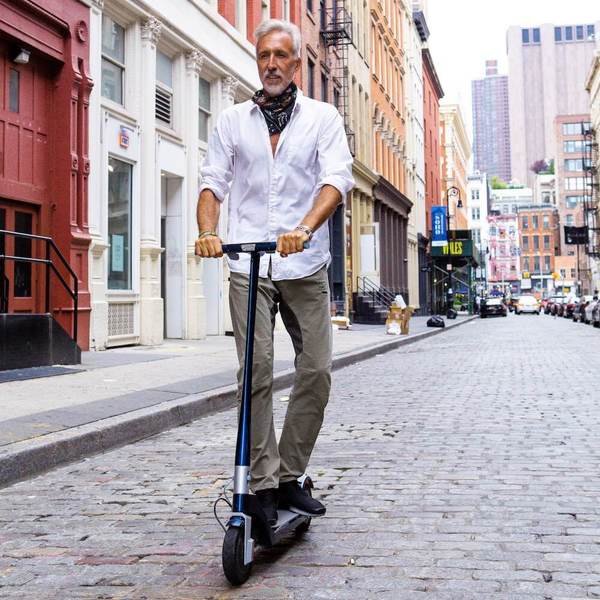 A CDC study in Austin, Texas found that one-third of all e-scooter accidents involved inexperienced, first-time riders. When e-scooter riders gain confidence by training on their scooter before they hit the road, follow all traffic laws, use hand signals to alert others of their intentions, and wear proper safety equipment, their chances of getting seriously injured diminish significantly. Because foot traffic is so unpredictable, riding on the sidewalk can increase those odds, and riders need to be aware of this and give pedestrians plenty of space. Experienced riders learn how to avoid obstacles and avoid becoming an obstacle themselves.

Many of these concerns do not even apply in areas with little to no sidewalk traffic and few infrastructural accommodations for smaller vehicles. In such cases, it may be necessary to ride on the sidewalk for at least a part of the trip, and may indeed be far safer to do so. Riders must use their own judgement, but should also know their local laws. The best way to find out whether your city has banned electric scooters from sidewalks is to check with your local Department of Motor Vehicles. Regulations around electric scooters have, in the past few years, been inconsistent and subject to change. However, in most large cities in the U.S., scooters are relegated to bike lanes and the right side of the road.

Some riders, who have a good understanding of regulation, may still feel it necessary to be on the sidewalk at certain times. In these cases, they can choose to walk alongside their scooter on the sidewalk without incurring a ticket or fine. Another path could be to simply reduce speed to a pace more comparable with walking--or when on a pavement that has great peripheral vision and is relatively empty, walk alongside their scooter when passing the occasional pedestrian.

Ultimately, tricky regulatory grey matters require riders who are watching out for those around them--not only pedestrians, but also cars who could be caught off guard by their travel patterns. 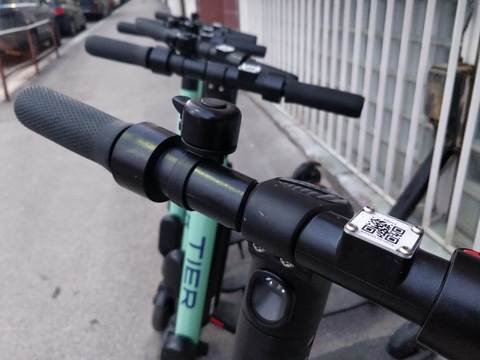 Elsewhere in the world, the situation can be very different. Last year, for example, Calgary passed new electric scooter laws that prohibited scooters from roads and only allowed them on sidewalks, footpaths, and bike lanes, though riders can still be fined for blocking pedestrians.

The reasoning behind this ordinance is that it supposedly keeps riders safer than they would be on the road. This discussion points to the bigger problem: the lack of infrastructure for alternative forms of transportation.

“City streets should be safe and convenient for all road users, regardless of their age, their abilities, or what mode of transportation they’re using,” says Consumer Reports’ manager of safety policy William Wallace. Ideally, this should be the case. But it’s often very different in real world scenarios. Electric scooters are here to stay, and cities will adapt to them over time. For now, riders should use their best judgment before taking to the sidewalk and always give pedestrians the right of way.