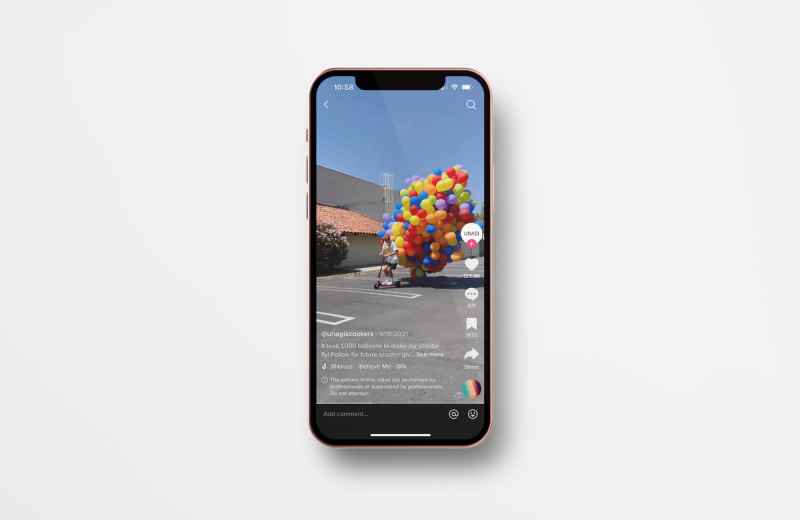 Ever wondered how many balloons it would take to fly?

Well, we did. We ordered over ONE THOUSAND helium balloons and tied them to an Unagi scooter to make it fly. With magnesium alloy handlebars, carbon fiber body, and weighing-in at 26.5 lbs, this scooter was built to soar.

After attaching all the balloons, we did some test rides. It was wild. Our stuntman could feel the force of the balloons lifting him up into the air. At one point, he got off and, if he hadn’t grabbed it in time, the scooter would have flown away!

Wait, we needed to set up the cameras. This was too crazy to miss. Once they were set up, we launched the Unagi into the air with the bundle of balloons—and it took off! We were jumping up and down and hollering from the parking lot where we were at…until…wait…where did it go?

Just kidding—we were prepared for that. We’d attached a camera to the body of the scooter and a GPS tracking device. It floated nearly two hundred miles away to the middle of Palm Desert, and we went after it. But what we saw next took our breath away.

The scooter had landed near an abandoned plane crash site, and we’d never seen something like that up close. It was beautiful, in a strange way. After getting our Unagi down from where it had landed, to our surprise, it still worked! Later that evening, we rode the scooter on top of the abandoned plane as the sun set. It was beautiful and totally epic…And then the video went viral.

Make sure to check us out on TikTok to see the full adventure and more stunts like this. Don’t forget to tag @unagiscooters with your own epic adventures.

Sydney here! I am the Social Media and Community Manager at Unagi Scooters. Hope you enjoy our editorial.

Day Out in Uptown Manhattan

If you find yourself cruising uptown, we’ve collected a list of our favorite places only a short scooter ride away. Get out and about and enjoy the day—we promise you won’t regret it.

Day Out in New York City

Ah, New York City, there’s nowhere else like it. Both locals and visitors agree that you can find some of the best art, restaurants, music, and theater in NYC. Take your scooter to the streets to avoid crowded subways and parking as you make your way around the city. Here is a list of places you won’t want to miss.

Scooter So Fresh, So Clean

We asked, and the Unagi community answered. Read our Unagi riders’ insightful tips on keeping your scooter so fresh and so clean.

Unagi Made a Scooter Fly

We ordered over ONE THOUSAND helium balloons and tied them to an Unagi scooter to make it fly. With magnesium alloy handlebars, carbon fiber body, and weighing in at 26.5 lbs, this scooter was built to soar.

See The Coolest of LA's Eastside on a Single Unagi Charge

A perfect day on your own perfect scooter. We’ve curated a list of our favorite spots in Echo Park that are easily accessible by scooter. Stop scrolling, and get out there.

Cities freed from cars, costs, and pollution. A world where there’s more time to enjoy the people and places you love. We’re part of a micro-mobility revolution. We’re heading in the direction of cities becoming more human-centered and livable. Happy Earth Day from Unagi.

Here at Unagi, we believe that freedom of movement means living more life. The opportunity to ditch a ride service, or avoid public transportation and navigate on your own terms is truly liberating. So how do we communicate that open air, free feeling you get riding an Unagi? By creating a music video, of course!