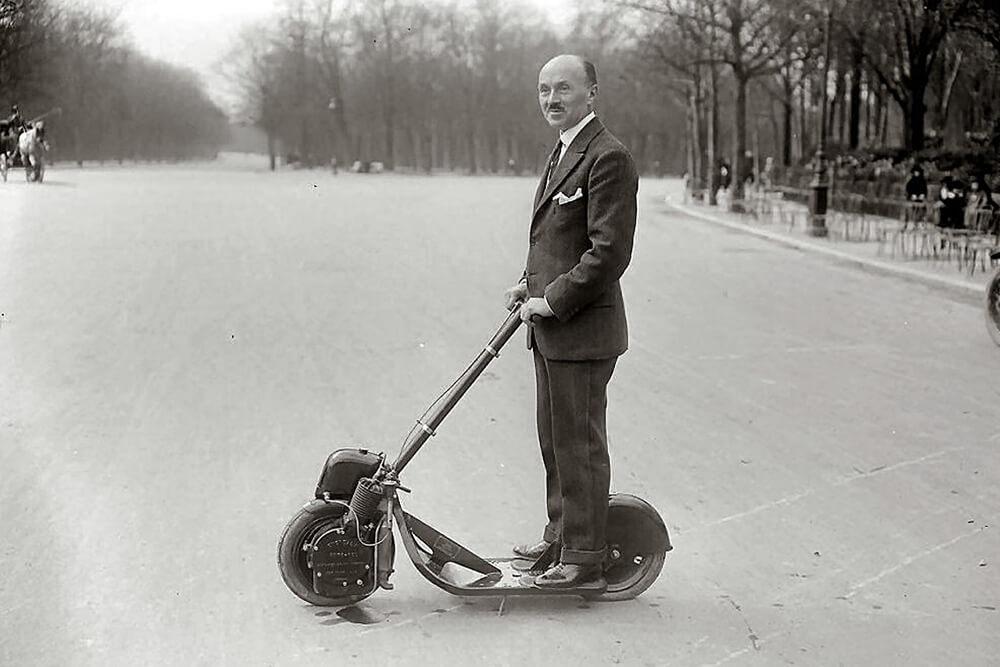 Where did electric scooters come from? “About a decade ago, scooters, rideshares, and e-bikes did not even exist in our vocabulary,” writes Sergio Avedian in an article that asks “is the scooter era ending?” They may seem new, but it’s shortsighted to think that scooters and micromobility in general only appeared lately on the scene to clutter up city streets, instigate “scooter wars,” and crumple into a pile of broken rentals. In fact, powered bikes and scooters have been around for at least as long as the car. The wooden kick scooter with skate wheels, crude but very effective, dates back to sometime in the late 19th century, when motorized bikes were also developed. The first motorized scooter for adults, the Autoped, was developed in 1913 and patented in 1916 by inventor Arthur Hugo Cecil Gibson (seen in cover photo). Built from 1915 to 1922, the scooter promised to revolutionize short trips, work commutes, the lives of doctors, students, “grocers, druggists and other merchants,” “collectors; repairmen; messengers” and “anybody else who wants to save money, time and energy in going about.” The gas-powered, two-wheeled, folding scooter marketed itself as the “motor vehicle of the millions,” getting 125 miles to the gallon and “a price so low that almost everybody can afford one.” That wasn’t exactly true. A hundred dollars went quite a lot farther in the 1910s and 20s than it does today. But the Autoped was well designed. It featured 10-inch tires and an air-cooled, 4-stroke, 155cc engine on its front wheel which could reportedly generate speeds up to 35mph. The rider pushed the steering mechanism forward to engage the clutch and apply force to a handlebar-lever to control speed. Pulling back on the steering column activated the Autoped’s brake. Like the Unagi Model One, the Autoped’s steering rod was collapsible for easy storage. At over 100 pounds, however, the scooter was hardly portable, just as it was not particularly affordable. But like the electric scooter, it surpassed initial expectations, and it did appeal to a wide range of users. Despite its characterization as a toy for the rich, the Autoped was ridden by delivery men, postal workers, and New York City traffic cops and captured in several photographs of the period. The Autoped also arrived at a time of significant political reform and increasing mobility, literally and figuratively, for women. The vehicle became a symbol of women’s empowerment during the Progressive era. British humor magazine Puck ran an advertisement with a speeding flapper on an Autoped. “Look out for the Autoped girl,” it read. Suffragette and socialite Florence Priscilla was famously photographed on her Autoped. The scooter’s feminist image persisted even as it evolved for specialized use at military bases, airports, and Hollywood studio lots, and as other manufacturers followed the Autoped’s lead, as Chris Wild writes at Mashable.

ABC Motorcycles produced the Skootamota, which had a top speed of 15 mph (24 km/h), and The Gloster Aircraft Company introduced the Reynolds Runabout in 1919, followed by the Unibus in 1920. The Unibus was promoted as the "car on two wheels."

Some of these early scooter designs were unstable, uncomfortable to ride and difficult to handle. The decades leading up to World War II saw the gradual introduction of a range of refinements, including efficient lights and brakes, gears, suspension, enclosed bodies and leg shields.

Notably, Amelia Earhart took several photos with her Autoped in the 1930s, including a 1935 photograph with her student, June Travis, taken the day she received her first flying lesson.

Subsequent decades would witness an ebb and flow in the popularity of both standing and seated kick and motorized scooters, with a few brands throwing their hats into the production ring from time to time. Meanwhile, the non-motorized kick scooter underwent a revolution when Wim Ouboter invented a lightweight, portable model in 1990 (supposedly to cover the last mile between his home and the local bratwurst shop in Zurich). Although his first creation became an afterthought, Outboter kept tinkering, and created a three-wheeled version—the Kickboard—which he debuted in association with American sporting goods company K2 at the International Sports Fair in Munich in 1998. The success of the Kickboard precipitated the launch of Outboter’s Micro Mobility Systems in 1999, which manufactured his original two-wheeled concept. Demand for the scooter was so high, that Ouboter allowed his Taiwanese production partner to distribute the scooter to the United States for a commission under the name “Razor.” and in 2003, the hugely popular brand added an electric motor. The story of the modern electric scooter begins after 2009, as Lithium-ion battery technology becomes refined enough to integrate into small vehicles like scooters that can be charged at home. The buzz around lightweight electric vehicles faded for some time, until American businessman Shan Chen launched a Kickstarter campaign to raise funds for his self-balancing Hoverboard. A hit with celebrities, the Hoverboard gained worldwide popularity in 2015 and spun off a near incalculable amount of copy-cats. This lack of standards and quality assurance ultimately led a vehicle that was more of a toy than a transport device to its demise.

Ironically, in 2018, Segway made a comeback to become the world’s primary source for the scooter-revolution that continues to the present day, leading to the current situation in which Bird, Lime, and a horde of sharing-based electric scooters line the streets and alleyways of every modern city worldwide. Rather than appearing out of nowhere, the modern electric scooter is instead the product of over 100 years of research, development, and real-world testing by inventors, engineers, and commuters. The Unagi E450 dual motor electric scooter is a lightweight aluminum and carbon fiber cruiser with a 15.5 mph max speed, electric brakes, and an instant maximum power of 900W. Made to be ridden, folded, and brought into your favorite sushi bar, it is an ode to over one hundred years of technological and aesthetic progress across scooter categories. With continued efforts in research and development, the entire team at Unagi can’t wait to write another page in the not-so-brief history of the scooter.